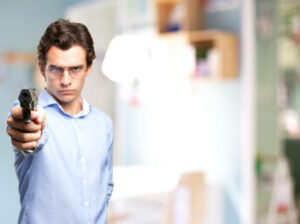 While every New Jersey citizen has the constitutional right to bear arms, there are some circumstances in which the risk a person poses to themselves or others is disproportionately great in relation to this constitutional right. In such cases, steps can be taken to prevent a person from obtaining or having ammunition or firearms through New Jersey court orders called Extreme Risk Protective Orders. If you require assistance handling an extreme risk protective order case in New Jersey, you should hire an experienced, skilled attorney who is familiar with criminal and gun law procedures, penalties, and defense, as well as the unique aspects of civil and criminal cases involving weapons.

Our team of attorneys strives to stay ahead of your circumstances and to zealously seek the best possible resolution of your ERPO case and any related matters, such as weapons charges or representation to get your guns back after they have been seized. When you retain us to help you with your ERPO defense, you can rest assured that you’ll get dedicated, informed representation and legal counsel.  Call us at 973-755-1695 for an initial consultation with one of our lawyers free of charge. We can help with your extreme risk protective order case arising out of Phillipsburg, Montague, Newton, Vernon, Frankford, Franklin Township, or elsewhere in Sussex and Warren County.

An Extreme Risk Protective Order (ERPO) is a court order that prevents a person who is considered to be a severe risk to themselves or others from obtaining or having guns. Its aim is to protect the person against whom the order is placed, as well as the people around them, by limiting their access to weapons that can be used for self-inflicted harm or harm to others. An ERPO orders that a respondent, the person against whom the order is filed, must turn over any firearms they own, as well as their gun permit to purchase and/or carry a firearm.

Who can Apply for a Temporary Extreme Risk Protective Order “TERPO”

An ERPO can be petitioned by a family member, present or former household member, or a law enforcement officer. In New Jersey, a ‘family member’ constitutes a current or former spouse or partner from a civil union, a person with whom the respondent has a child (including current pregnancy), or a dating partner. A household member is anyone who currently lives or formerly has lived with the respondent. Any New Jersey law enforcement officer can petition an ERPO with just cause.

How to Petition for an Extreme Risk Protective Order

In order to apply for a TERPO, a family member, householder, or law enforcement officer files a petition at the New Jersey Superior Court in the county in which the respondent lives, or that in which the petitioner lives if the respondent lives out-of-state. A petition may also be filed at any New Jersey state, county, or local law enforcement office. The agency in which the petitioner files for an ERPO is responsible for helping them enter the request into the New Jersey online system.

According to N.J.S.A 2C:58-23(a), the court must hear a petition for a TERPO “in an expedited manner.” As such, a judge will determine whether a Temporary ERPO (TERPO) is ordered the same day that the application is filed. If a TERPO is filed, law enforcement will deliver the TERPO to the respondent. The respondent’s guns, ammunition, and permits must be surrendered or taken by the police in accordance with a search warrant to seize weapons until after a final hearing.

Upon the court’s issuance of a TERPO, within 10 days, a Final ERPO (FERPO) hearing will be held. During the hearing, the court may hear testimony from the petitioner and additional witnesses, as well as sworn oral testimony from a prosecutor or law enforcement agent who has been responsible for conducting an initial search of information on the respondent. The respondent also has the right to testify, provide witnesses, and cross-examine.

A Temporary Extreme Risk Protective Order (TERPO) extends until a further order is made by the court. This can mean the dismissal of the TERPO at the final hearing, or the implementation of a FERPO after the case is adjudicated. Generally, a Final Extreme Risk Protective Order (FERPO) lasts for one year. This means the respondent’s firearms and weapons licenses will be confiscated for one year, or until the order is terminated. A FERPO can be appealed, and it can be terminated early at the approved request of the petitioner. 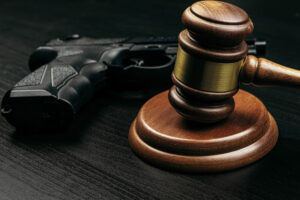 There are many factors considered when a court determines whether to issue a TERPO or FERPO. They consider whether the respondent has a history of violence against themselves or others; any history of physical force or threat thereof; whether they are the subject of a restraining order; have been arrested in the past or are currently charged with a violent crime or disorderly persons offense or any charges relating to harm to animals; have a history of alcohol or drug abuse; have recently acquired a deadly weapon and/or have irresponsibly displayed it; have a current or prior ERPO issued; and mental health history.

The Origin of Red Flag Laws

Multiple U.S. states have enacted laws putting these Extreme Risk Protective Orders, often called “red flag laws,” in place since the first red flag law was enacted in Connecticut in 1999. Most of the states that enacted red flag laws did so after a mass shooting event or death caused by a mentally disturbed person. For example, after the high school shooting in Parkland, Florida, five states signed ERPO laws, bringing the total to ten. Nineteen states and Washington, DC, currently have protective red flag laws.

If a Temporary Extreme Risk Protective Order has been issued against you, retain an attorney can help you bring a strong counter-argument in the Final ERPO hearing as well as appeal a judge’s decision to order a Final Extreme Risk Protective Order. You can best prepare to defend your gun rights and maintain possession of your legally-obtained firearms and your necessary weapons permits. Our lawyers have the foresight and experience to challenge the allegations and fight to safeguard your rights and obtain the best possible outcome for you. We appear in EPRO cases on behalf of clients in North Warren, Wantage, Lopatcong, Phillispburg, Hackettstown, Hopatcong, and throughout Sussex County and Warren County. Call 973-755-1695 to speak with an attorney who can remain by your side throughout the process of your extreme risk protective order case. We are pleased to offer free consultations anytime and encourage you to call and get your questions answered today.